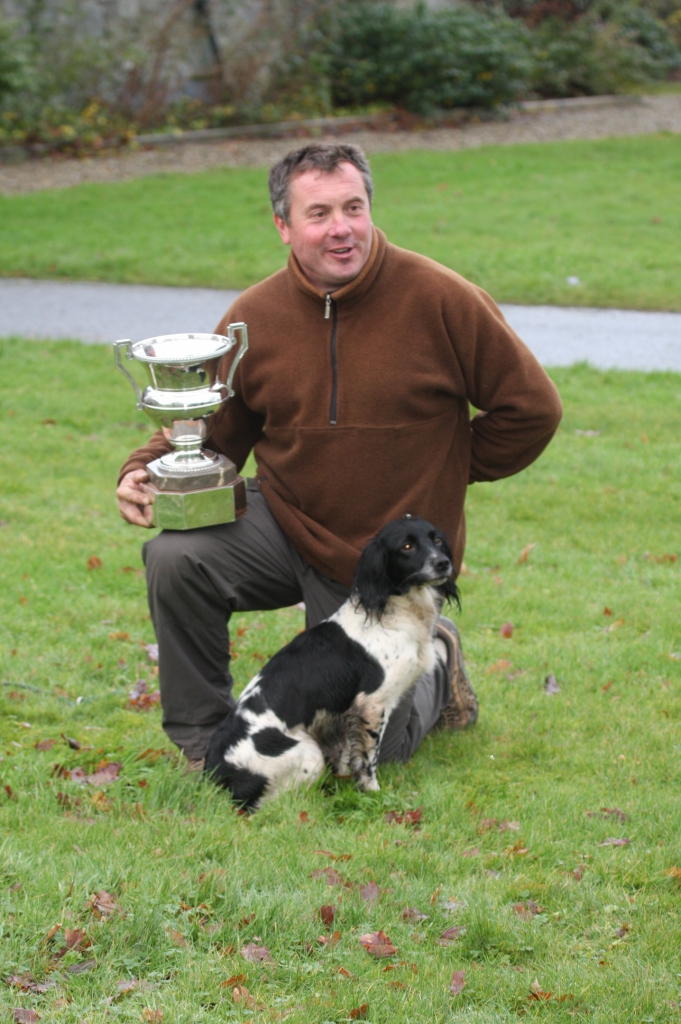 Great News from the Championship – John Bailey takes 1st Place
We would like to congratulate John Bailey on winning the Irish Field Trials Championship with Countryways Judy. I was privileged to be at the championship myself, with Milo, and to be able to go up and watch John in his final run. It has given a great boost to myself, and our kennels to be able to breed such a class animal and to be able to achieve a lifetime ambition of producing top class spaniels. Judy is not only bred by us, the sire is Raven who as you all know, I like so much. Talking to John about Judy, he says that she has always had such natural ability, he says that she was almost born with gun sense. If you could have seen her at the championship she covered the ground so thorough it could have been so easy to miss game. The cover was low and the birds were sitting tight, but John took his time, and managed to find several birds within only 30 yards, on the video you will see she has to punch one out several times before it decided to fly.

We at countryways are ecstatic to finally breed, train and produce a field trials champion, it has only taken 27 years to produce a dog myself, so we are over the moon as you have probably read in my write up on Milo, he was one of the easiest dogs that we have ever trained. He has a lovely nature, but with lots of power, he qualified to run in the English and the Irish chmapionship, by winning the North Devon open qualifier, and also winning the Wiltshire open qualifier, and of course doing his water test which now makes him a champion. We took him to the Irish championship in the last few days, I would like to think he had a good first run, very long almost 40 minutes with three finds on pheasant, two on woodcock, finally with a long retrieve on a woodcock, and finally a retrieve on hen pheasant. He started off quite well, on his second run, but unfortunately flushed several pheasants on the edge of some 5ft high bullrushes where one of the birds was shot into the lake, which was full of bullrushes, sent for the retrieve and was distracted by multiple flushes finally picking the retrieve but making a bit of mess. The ground in the Irish championship was perfect, the game supply and the work that the keeper and his helpers had done was as good as any trial or championship that I have attended. It was just going to come down to luck on the day, of where the birds fell, but that is trialling. I went to the championship with six or seven good friends from England, and I believe we all had a good time. It was nice to see Spam with a big smile on his face, he had a certificate of merit and he was elated, I Would like to congratulate Gary Vizey for coming fourth plac, he travelled up with me and he didn’t rub it in too much! And of course I would like to congratulate John again for winning, I know it must mean so much to him, as we all wait for our day.

The English championship is in Norfolk this year, on the 9/10/11th January, where we will be hoping to do a little bit better with Milo. But I can say I am over the moon, and I have had a wonderful season.

Later on in the spring I am sure you will be able to see the full length of the Irish Championship, that Paul French is rushing to produce, lets hope he makes me look good!

Obviously, Milo is now standing at stud, just waiting for those bitches!

We use cookies to ensure that we give you the best experience on our website. If you continue to use this site we will assume that you are happy with it.That's fine!Privacy policy